Pet Shops and Puppy Mills: How They Voted 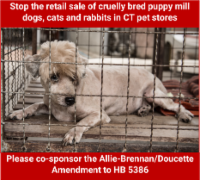 Pet Shops and Puppy Mills: HB 5386 introduced by Representatives Raghib Allie Brennan (D- 2)and Jason Doucette (D-13) would stop the sale of commercially and inhumanely bred cats, dogs and rabbits in CT pet shops.  There was no vote on the bill, but we were able to gain significant support and lay the groundwork for future action. A special thanks to those lawmakers at the forefront of efforts supporting this bill: